Cavitation has been studies for many years for different applications and phenomena owing to the often-violent conditions generated in the vicinity of cavitation events.  To facilitate its study, numerous methods of generating cavitation have been developed including laser, acoustic and hydrodynamic means.  Histotripsy is a non-invasive ablation technique that relies on targeted generation of cavitation events to mechanically fractionate and destroy affected tissues, and has been demonstrated to generate precise, well-defined lesions.  However, quantifiable metrics for assessing histotripsy induced damage (i.e. dose) in targeted tissues, as well as robust methods for monitoring cavitation and cavitation damage in real time remain to be established.  Shockwaves emitted from the cavitation nucleation, collapse, and rebound of acoustically nucleated bubbles are a possible phenomenological candidate to determine the damage state of a cavitating medium. It has previously been demonstrated that bubble dynamics such as collapse time correlate with material stiffness for acoustic and laser driven cavitation, and that the amplitudes of the collapse and rebound shockwaves are affected by the material viscosity. However, it remains to be determined how the material properties of a cavitating medium can be assessed from shockwave measurements. We hypothesize that features encoded in shockwaves captured in Acoustic Cavitation Emission (ACE) signals from histotripsy treatments can be used to quantitatively monitor cavitation applied or cavitation dynamics, which can be used to non-invasively determine the damage state of a therapy target. 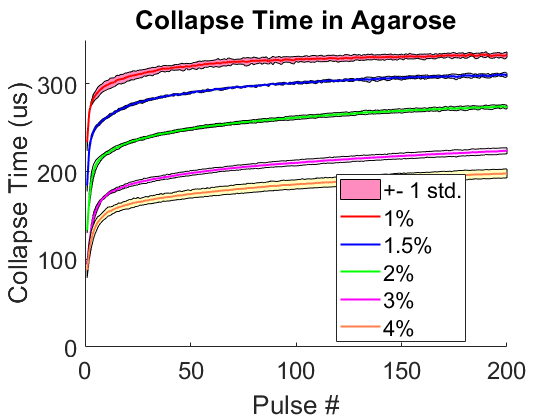 Figure 1. Agarose is a type of tissue-mimicking hydrogel that is commonly used in research due to its viscoelastic behavior (similar to that of soft tissue).  By increasing the concentration of agarose, one can create transparent gels that cover a range of stiffnesses.  In this case, cavitation was repeatedly generated in gels ranging from 1%-4% agarose (approximately 10kPa – 100kPa), and bubble collapse times were evaluated via timings of the nucleation and collapse shockwaves emitted from each cavitation event.  Greater stiffness gels demonstrate greater suppression of bubble growth due to the higher concentration of polymer crosslinking present in higher concentration gels.  Further, as each sample was repeatedly cavitated, the strain due to bubble activity breaks these bonds, leading to a decrease in material stiffness at the treatment focus, permitting greater bubble growth. 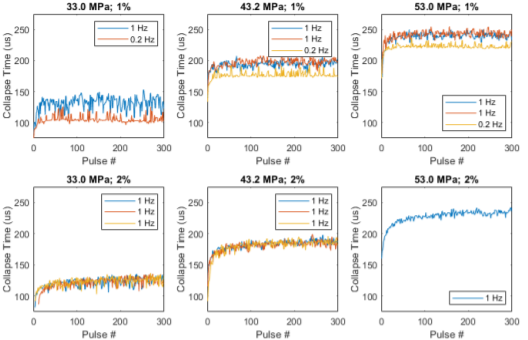 Figure 2. Air and bone are significant aberrators of sound waves and as a result pose a significant challenge when planning/performing treatments.  In a study to demonstrate the efficacy of monitoring ACE signals through physiologically relevant obstructions, cavitation was generated repeatedly in agarose gels (1%, 2%) through an excised human skull.  Despite significant noise from acoustic reflections off the skull, ACE signals recorded during treatment were able to evaluate bubble lifespan.  Bubble lifespan is demonstrated to decrease with higher gel stiffness, and increase with greater acoustic power.